Touya, in Tsubasa Reservoir Chronicle is the king of Clow Country and the older brother of Sakura. He became Clow's successor as the king, and uses Kazuhiko's weapon from Clover to fight, and seeks to continue the work his father started. He is very defensive of his sister, though he admits that Syaoran will take care of her. Despite being royalty, Touya is a proficient fighter with a sword and is highly knowledgeable about the supernatural, most likely due to his close friendship with High Priest Yukito. In theory he has no magical powers, though he might have some intuition about the future.

It is later revealed that Tōya's true parents are Nadeshiko and Fujitaka, not Clow.

As Sakura, Syaoran, and the rest travel through different worlds, they have met various iterations of Touya and Yukito. None of these have held the high social status of King Touya, and in fact work jobs in the service sector.

Touya was born the prince of Clow, but inherited the throne sometime during his mid-teens after the (as-yet-undisclosed) death of his father, the king Clow. Touya was raised alongside Yukito, leading to a very close friendship (and perhaps more) between the two of them.

After the death of both the king and the archeologist Fujitaka, Touya allowed Syaoran to continue the work on the mysterious ruins in the kingdom, despite Touya's distaste for the boy. Touya and Yukito were both aware that Syaoran was "the one" for Sakura.

When the ruins at Clow were attacked by strange shadowy warriors, Touya arrived to defend against them. He was injured in the battle, injuries that took some time to heal and still leave him somewhat vulnerable.

Tōya is revealed to be the son of King Fujitaka and Queen Nadeshiko. He is also the brother of the Real Princess Sakura(Tsubasa), actually he met the "Original Syaoran" as well. Like all Touyas he shared the dislike for Syaoran. In the timeline "twist" that came after "Syaoran"'s wish, his future however was not changed, due to the fact that he did not know about Sakura's seal of death. 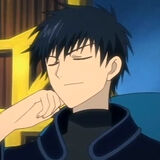 Retrieved from "https://tsubasa.fandom.com/wiki/Tôya?oldid=21322"
Community content is available under CC-BY-SA unless otherwise noted.