His name in Tsubasa ~ChARACTer GuiDE~ #1 is written as Kyle Rondart, similar to the Mokonas since he was created by Fei Wang Reed.

Kyle Rondart is an agent of Fei Wang Reed, first introduced in Jade as the kind doctor of Spirit village in Jade Country. He turns out to be the one responsible for the children's disappearances. His true goal was revealed to be able to obtain Sakura's feather. He was later discovered by Syaoran who fights him until he finally gets caught in the Castle of Spirit while it crashes down.

While the group believed him to be dead, he reappears in Piffle as one of the contestants of the Dragonfly race. The group automatically assumes that he is just another parallel. Kyle cheats to increase his chances of obtaining Sakura's feather which is the prize of the race. However, Kyle ends up losing the race to Sakura anyway. Once the race was finished, it is revealed that Tomoyo was doing some irregularities to find the one who was after the feather (since she was warned by Tomoyo-hime from Japan, that the feather was highly valuable and that many would chase after its power). Having lost the race, Kyle attempts to steal Sakura's feather from her at the reward ceremony but is thwarted by Mokona. It is then revealed that he was the same Dr. Kyle from Jade Country. To avoid being captured by Tomoyo's bodyguards he departs to another dimension immediately after giving Syaoran one piece of advice: "different people may have the same aspect through worlds, but they'll never know if they are the same person in fact".

A chibified version of Kyle Rondart makes a brief background appearance in Season 2 Episode 11 as one of the students (and classmates of Sakura and Syaoran) in Kurogane's class. Whether or not this was the same Kyle Rondart is unknown.

Kyle reappeared during the Dream World/Nihon arc to kidnap Clone Sakura's body also taking the remaining feather after her soul had disappeared. Upon his leaving, "Syaoran" desperately calls out for him to wait, but it is too late. In chapter 181 he is seen along with Fei Wang and Clone Sakura's body in the Clow arc.

In chapter 211, Kyle disguises himself as Fei Wang Reed, and is killed by the combined effort of Tsubasa Li, Kurogane and Fai, following the Clone's death. As he fell to the ground, he revealed Fei Wang Reed with Clone Sakura's body behind him. At that point, Fei Wang Reed reveals that Kyle Rondart was one of his artificial creations.

Kyle Rondart had a slender build and was of average height. He usually wore dark clothing that fit in with the general type of clothing of the world he was on. The only exception was in Season 2 Episode 11 where he wore a light green sweater vest with a white shirt. Although it is unknown if that was the same Kyle Rondart or not. Interestingly, he also wore glasses that bore a slight resemblance to the glasses that Clow Reed wore. In the anime he had blue eyes while he was in Jade Country and Piffle World, but, in his final appearance in the OVA, his eyes were much darker. He had long smooth black hair that was tied into a skinny ponytail using a ribbon. He also bore a strong resemblance to xxxHolic protagonist Kimihiro Watanuki which has led to speculation among some fans that the two might have either been somehow related to each other, alternate versions of each other or that Kyle Rondart may even have been a clone of Kimihiro Watanuki.

When he first appears in Jade Country, Kyle Rondart seems to be a very kind and compassionate man that cares a lot about the children of the town. However, it is later revealed that he was the one behind the disappearances and was using the children to get Sakura's feather from the castle. He had hypnotized the children when he examined them and he planted the mental image of a blackbird inside their minds which they would follow at night to the castle. After the truth about him is revealed, Kyle reveals himself to be a quite clever and deceptive individual that had no scruples about killing in order to achieve his goal. This was shown when he held Sakura at gunpoint (knifepoint in the manga) in the castle and attempted to kill both Sakura and Syaoran to get the feather. In Piffle World it is revealed that he has the ability to travel to different dimensions on his own.

He was also able to generate a personal shield around himself to prevent Tomoyo's guards from stunning and capturing him, though this shield apparently had limitations and couldn't stop attacks from close range.

It is safe to assume that Kyle is very intelligent. He had spent 2 years serving as the only doctor in the town of Spirit in Jade Country before Syaoran, Sakura, Fai, Kurogane, and Mokona showed up. Therefore he obviously had an extensive amount of medical knowledge. His plans were, for the most part, well put together and would likely have succeeded if not for the actions of Syaoran, Sakura, Kurogane, Fai, and Mokona. He was also a master at deception. He had deceived the people in Spirit for 2 years and had them wholeheartedly believing that he really was a kind and compassionate person when in reality he was secretly putting together a diabolical plan. When the children started disappearing no one ever suspected that he was the culprit. At first, even Syaoran, Sakura, Fai, Kurogane, and Mokona believed he had nothing to do with it. His mastery at deception was shown again in Piffle World. When the Dragonfly Race was sabotaged, Tomoyo ordered background checks on all of the racers and apparently, no one suspected that the culprit was Kyle.

It is also implied that Kyle may not have been really loyal to his master and creator, Fei Wong Reed, and that he may have really wanted the feathers for himself. During the skirmish in the castle at Jade Country, Kyle stated that he wanted to use the feather to take over the entire country for himself. Although it is possible that he said that so no one would know about Fei Wong's involvement.

Despite his evil actions, it is implied that there may have been a little bit of good in him. Before fleeing Piffle World he advised Syaoran to keep in mind the fact that as he travels to different dimensions that he is likely to come across people who have the same physical appearance as previous people he had met, but that he can never be certain whether they are parallels or really the same person. It is possible that Kyle was trying to subtly help Syaoran with this piece of advice. Additionally, Kyle was visibly shocked and perhaps even hurt (emotionally) when Fei Wong told him that the original Sakura was destroyed after she was cloned. This implies that he perhaps cared about the original Sakura, at least a little. He also seemed to be at least somewhat attached to fellow minion, Xing Huo. It is unknown what his reaction was to her death at the hands of Fei Wang Reed.

In Chapter 211, Kyle Rondart (disguised as Fei Wang Reed) briefly battles Tsubasa Li, Fai, and Kurogane but is quickly defeated and slashed by their swords. Upon being slashed his disguise falls apart revealing his mortally wounded self to Tsubasa Li, Fai, and Kurogane. As he lay mortally wounded he says "For...this sake...at your..." but he then dies from his injuries before he could finish what he was saying, leaving his final thoughts shrouded in mystery. Being an artificial creation, Kyle Rondart's body disappeared when he died. 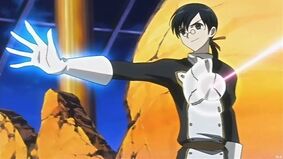 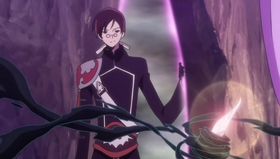 Retrieved from "https://tsubasa.fandom.com/wiki/Kyle_Rondart?oldid=21260"
Community content is available under CC-BY-SA unless otherwise noted.