Amaterasu is a crossover character from the CLAMP series RG Veda (even though there she had the title of "General Jigoku"), hinting that her real name might be Kendappa (乾闥婆王',, Kendappa-Ō).

Amaterasu is the Shinto sun goddess and the mythical ancestress of the royal family of Japan. In Tsubasa Reservoir Chronicle though, she is the Empress of Nihon and is Tomoyo's older sister as well.

Amaterasu arrives to Suwa to find Kurogane shaken up over of his mother and father's death, after her sister foresaw this event in dreams. She went to Suwa to put an end to the demons' attack, and tries to stop the young prince of Suwa, but it's her sister who brings him back to his senses.

In the Nihon Arc she welcomes the travelers, offering to make a welcome ceremony for them and offering them to stay in the Shirasaki Castle as long as they like. When Seishirou comes she tells them (Syaoran and him) not to fight inside the Castle, then Tomoyo casts a barrier for them to fight inside like the ones from X. After the fight between "Syaoran" and Syaoran Li, she and her sister say goodbye to Kurogane, Fai, and "Syaoran", as they go search for Sakura in Clow. 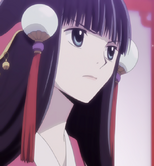 Retrieved from "https://tsubasa.fandom.com/wiki/Amaterasu?oldid=21951"
Community content is available under CC-BY-SA unless otherwise noted.